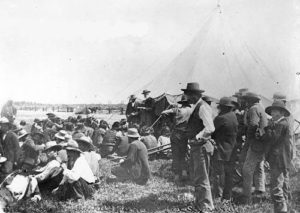 AS LONG AS THE SUN SHINES, GRASS GROWS AND THE RIVERS FLOW

Do you want to champion change alongside us for the betterment of our Nations and keep our Treaty rights strong?  Since 1997, the Treaty 8 First Nations of Alberta have been dedicated to the social, cultural, education and economic development of the First  Nations people of Treaty 8 (Alberta).

On June 21, 1899, the eighth treaty between the Indians of North America and the Queen of England was signed. The signatories of Treaty 8 agreed to its terms for reasons of peace and friendship – ensuring what they thought would be a partnership. Treaty 8 was the most comprehensive treaty, encompassing a land mass of approximately 840,000 kilometers, and is home to 39 First Nation communities. Treaty territory covers the areas of Northern Alberta, Northwestern Saskatchewan, Northeastern British Columbia, and the Southwest portion of the Northwest Territories.

For more information and to contact Treaty8 Directly, head over to http://www.treaty8.ca/

The Aboriginal Job Board is a National First Nations-specialized online employment community focused on helping members of the Indigenous community find suitable employment. We aim to highlight employers who are dedicated to hiring Aboriginals as part of their organization. While the job board caters to a specific community, we welcome all interested applicants across Canada to explore and apply to the available job opportunities we present. We have a ‘zero tolerance’ policy when it comes to discrimination; we seek to provide an inclusive environment for all individuals.
Get Started

Check out our near perfect rating on Trustpilot